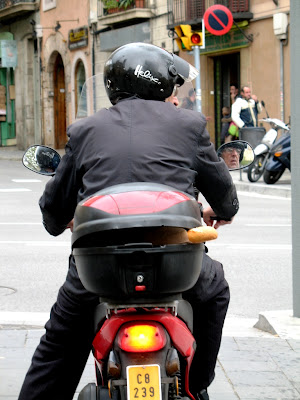 Apparently, the little "caboose" on the back of this motorcycle can't quite fit a long loaf of bread.

This photo was taken in the late afternoon in the Sarrià district near Barcelona. It is one of the many "old towns" that were incorporated as part of Barcelona at the turn of the twentieth century. If you want to see what "real" Barcelona is like, hop on a bus to the suburbs. You'll spot grandmothers picking up their grandchildren from school and people out picking up groceries for dinner.

Email ThisBlogThis!Share to TwitterShare to FacebookShare to Pinterest
Theme Transportation